Â COLOMBO, SRI LANKA - March, 2014 -
Nayana Thakshila Perera Forced two Muslim students to remove their clothing and worship her
Here's the story from COLOMBO TELEGRAPH - BBS to Rescue Anti-Muslim Principal
The Bodu Bala Sena General Secretary Galagoda Atte Gnanaasara, yesterday defended the actions of Nayana Thakshila Perera who had forced two Muslim girl students to take off their attire, then ordered them to worship her, saying it is in accordance with Education Ministry Circulars and Supreme Court orders. 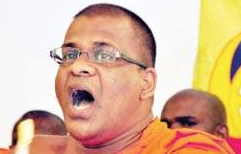 Earlier the Graded Principal’s Union General Secretary S. U Kariyawasam also charged that the Principal at the centre of the accusations was a Political appointee and was not fit to serve in a Grade I school.
Perera, is a Grade III qualified Principal and has only functioned as a deputy Principal for two years.
The BBS secretary ignoring the fact that Perera had forced the students to worship her, and was also an unqualified politically appointed Principal addressed a Press Conference yesterday and said the the Muslim ministers were just harassing the Principal.
“When principals punish such students, Muslim Ministers and Governors intervene and harass principals whose duty is to maintain discipline in schools. That’s exactly what happened to the Principal of the Janadhipathi College who asked two female Muslim students to remove their attire,” he charged.
The Colombo Telegraph learns that the Principal had during a meeting with the General Secretary on Tuesday briefed him on the issue after which yesterdays media briefing was held.
Many observers point out that the intervention by the BBS in the matter is an indication that the Principal was discriminatory in her actions.
The Colombo Telegraph learns that the students forced to worship the principal is still suffering from the trauma and has not attended school since the date of the incident.
It's time Muslims use their voice and speak out.
See how others use TV, radio media & social networks (Facebook & Twitter)?
Speaking Out - ATTACKING MUSLIMS & ISLAM
YOU CAN CHANGE THAT - NOW
We Now Have A Voice
That's Right - All Across United States & Canada & around the world
Free-To-Air TV antennas: Los Angeles, Dallas-Ft. Worth, Columbus, Ohio & New York City
And on Satellite TV, iPhone & Smart phone APPS
Watch Free (no adds, no commercials - ONLY ISLAM) 24 hours a day!
LIVE Call-In shows (need your support - so call-in LIVE) every week.
How to Watch? - www.GuideUS.TV and www.Guideus.TV/live
How to Contact? - This email address is being protected from spambots. You need JavaScript enabled to view it.
How to Support? (keep us on-air)?

www.GuideUS.TV/donate (even $10 monthly)
If we don't speak up now - Who is to blame for what happens next?

If you want people to READ - You Have to Share
(Facebook, Twitter & text messages)
This email address is being protected from spambots. You need JavaScript enabled to view it.