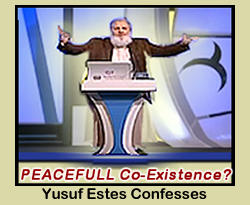 They asked Yusuf Estes the question: "Is Islam compatible with TODAY's World?" -- Here's what he said:

Where is the true peace? So let us now ask, once and for all, "IS ISLAM COMPATIBLE WITH THIS IDEA OF PEACEFUL CO-EXISTENCE?"

The answer is a simple one with a one word answer. But this needs clarification and explanation to gain a true understanding of what is really happening, and what Islam is telling us to do about it."

Now let us look to what some other people say about Islam and peaceful co-existence . .

Today in the west, especially in the United States we are hearing from the mainstream media, television, newspapers, magazines and radio talk shows - that ISLAM is all about terrorism and is totally incompatible with this proposition of co-existence. We also hear, in the west, that some kind of moderation has to be in place in order for Muslims to live peacefully alongside other faiths.

Shar'iah Law - This is one of the main obstacles between Islam and peaceful co-existence, according to these same sources. Laws have already established in some of the states banning the Shar'iah Law and more states are considering doing the same.

The real scary problem with this legislation against Islam in America, is the Constitution of the United States provides the formal pledge, assurance, promise and guarantee that no law shall be made or enacted with respect to any religion.

What does the Bill of Rights tell us about the freedome of religion?

The Bill of Rights is a list of limits on government power. For example, what the Founders saw as the natural right of individuals to speak and worship freely was protected by the First Amendment’s prohibitions on Congress from making laws establishing a religion or abridging freedom of speech. For another example, the natural right to be free from unreasonable government intrusion in one’s home was safeguarded by the Fourth Amendment’s warrant requirements.
www.BillOfRightsInstitue.org

The Conventions of a number of the States having, at the time of adopting the Constitution, expressed a desire, in order to prevent misconstruction or abuse of its powers, that further declaratory and restrictive clauses should be added, and as extending the ground of public confidence in the Government will best insure the beneficent ends of its institution;

Resolved, by the Senate and House of Representatives of the United States of America, in Congress assembled, two‐thirds of both Houses concurring, that the following articles be proposed to the Legislatures of the several States, as amendments to the Constitution of the United States; all or any of which articles, when ratified by three‐fourths of the said Legislatures, to be valid to all intents and purposes as part of the said Constitution, namely:

Congress shall make no law respecting an establishment of religion, or prohibiting the free exercise thereof; or abridging the freedom of speech, or of the press; or the right of the people peaceably to assemble, and to petition the government for a redress of grievances.

By the way, here's another Constitutional Right Guaranteed to all . .

The right of the people to be secure in their persons, houses, papers, and effects, against unreasonable searches and seizures, shall not be violated, and no warrants shall issue, but upon probable cause, supported by oath or affirmation, and particularly describing the place to be searched, and the persons or things to be seized.