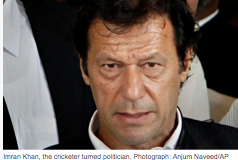 - Pakistan's last-ditch effort to hold peace talks with the Taliban experienced a setback when the first meeting in an already bizarre process was cancelled over concerns that Imran Khan had turned down an invitation to represent the militant group.

A four-man committee appointed by the Pakistani prime minister, Nawaz Sharif, had been due to meet a group of three extremist clerics in Islamabad on Tuesday afternoon.

Although none of the three are members of the Tehreek-e-Taliban Pakistan (TTP), a coalition of Islamists fighting against the government, they are among five people the militants originally proposed as their representatives. Khan, the cricketer turned politician, and Mufti Kifayatullah, a member of a rightwing religious party, turned down the TTP's offer.

The refusal by the two men to participate was cited as one of the reasons that the meeting was cancelled. Irfan Siddiqui, one of the government-appointed negotiators, said the decisions of Khan and Kifayatullah had "put a question mark on talks".

The cancellation underlined widespread scepticism about a push for peace announced as a "last-chance" option by Sharif last week. His statement in parliament surprised many commentators as it had been widely anticipated that Islamabad was about to give its blessing for a military push against TTP sanctuaries.

Even a member of the government negotiating committee, the highly regarded journalist Rahimullah Yusufzai, had publicly expressed doubts about whether anything would come of the meeting, pointing out that previous peace deals had always come unstuck.

The talks effort has no agreed timeframe or pre-agreed terms for the discussion. One person was apparently approached by both sides to represent their interests. Ansar Abbasi, a journalist who said he had turned down an offer from Sharif, was being considered by the TTP, the movement's spokesman said.

Other members of the government team include a former diplomat, Rustam Shah Mohmand, and a retired army spy, Mohammad Aamir. Ayaz Amir, a newspaper columnist, said all of the men except Yusufzai were Taliban sympathisers.

Sharif asked Yusufzai to join the commission just hours before the announcement, adding to suspicions the panel was little more than a last-minute scheme to buy more time before authorising military operations. Many politicians, particularly from Sharif's faction of the Pakistan Muslim League, fear that an attack on militant sanctuaries will lead to retaliation.

Another problem is whether the individuals delegated by the TTP have any authority to speak for the movement. They include Sami-ul Haq, a radical cleric popularly known as Mullah Sandwich. Although he was once deeply involved with the Afghan Taliban in the 1990s, some analysts believe the Pakistani movement has evolved considerably since those days.

Cyril Almeida, a prominent journalist, said the ongoing treason trial of the former military dictator Pervez Musharraf may be playing a part in Sharif's calculations. The trial, which started last month, has dragged on for weeks with Musharraf failing to turn up because of legal challenges, security scares and health problems.

"The trial of Musharraf while a military operation is under way would be virtually impossible to pull off," Almeida said.

Musharraf is due to appear in court on Friday. If he does he will be indicted and proceedings could then move swiftly.