Seismic (earthquakes & related activities) across central and eastern parts of North America are known to be caused by human intervention. Activities behind these earthquakes include impoundment of water (behind dams), injection of fluids into earth's crust, extraction of gas and fluids, removal of rock formations (mining), quarry operations and other forms of induction and removal of natural resources.

At first these induced earthquakes for the most part, were labeled as acceptable or insignificant and somewhat less than the number of natural earthquakes. 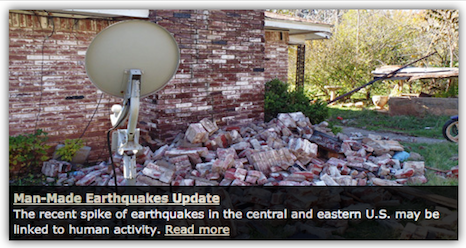 Now however, some regions especially the south-central U.S. show a high number of recent earthquakes, according to seismologists, to be human-induced.

Additionally, new evidence shows these activities taking place in one area are being transferred to other areas. Earthquakes may

occur in many other locations from these activities without showing any effects in the region where these operations are taking place.

Special scientific studies devoted to this case prove case for link between human underground operations and sequence of earthquakes as well as increasing the effects and damage caused by otherwise natural occuring earthquakes.

These investigative studies address the process suspected of triggering seismic activity and significant altered stresses in bedrock at the source of the earthquakes. Also addressed in the studies are the ways characteristics of human triggered earthquakes are different from those occuring in natural earthquakes in the various regions.