Is It REALLY Over? 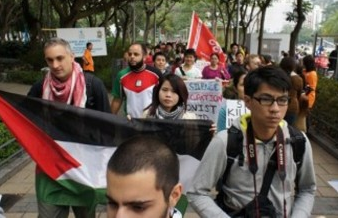 Palestine -- November 22, 2012 -- Gush Shalom, Israeli Peace Bloc stated today in a press release, tonight's ceasefire puts the end to a week of brutal bloodshed and killing in the Holy Land.

At long last Israel's government has come to understand their limitations of power, and stopped the onslaught before things worsened. There had been serious talk of ground invasion just yesterday, which would have taken the bloodshed and mayhem to even higher levels and put Israel in deep isolation.

Israel had made claims of what they termed "surgical bombing" implying that only their exact targets would be hit and destroyed. The the televised images showed quite a different story. The enormous increase in civilians killed, children blown to pieces and homes leveled to the ground were the clear pictures seen around the world.

The president of Egypt, Mohamed Morsi played the most constructive and positive role in the negotiations as the agreement between Israel and Palestinians was reached. This included a provision for at least some relief of Israel's siege against the people of the Gaza Strip in Palestine.

Egypt stands to gain as a partner in the area by increased trade, opening channels of communication between neighboring nations and giving balance to the political agendas between the secular and religious parties operating there.

Lifting the siege on Gaza Strip carries more than just the interest of those in Palestine - it is also a benefit to the Israelis.

Even though the sanctions and ban on many things coming into Palestine had left many in abject poverty, starving, suffering with lack of even basic medicines there was still an abundance of weaponry available at the disposal of the Palestinians, as was clearly demonstrated over the last week.

The agreement at last, permits the people of Palestine to leave their own country and to return as they like, by land, sea and air, just like the Israelis have enjoyed for decades and all the rest of us take for granted.

Many living in Israel are rightfully concerned and worried regarding the ceasefire agreement, apprehensive about whether or not it would only be a temporary situation with a new outbreak of violence looming somewhere in the near future. All parties should work forward for a positive ceasefire and complete peace agreement to remain in effect for all concerned.

We must keep in mind this is not the first time the government of Netanyahu had negotiated and came to an agreement with Hamas, the operational governing body of Palestine. The Egyptians played critical part in the overall process by passing the messages between the two parties back and forth, handling the proposals and the counter proposals.

This is a definite advance and sets the precedent for political negotiations between the various divisions amongst the Palestinians as well. Uniting these different groups would be in the very best interest of not only Palestinians and Egyptians, but for the Israelis as well. For this to be achieved it is definitely required of the Israeli government to end their occupation of the West Bank, something they have fought to take by force and hold under siege for many years.