This is the story we just received from Syria by way of the Internet. Read . .

A hospital worker has provided horrific video evidence that medical staff in the besieged Syrian city of Homs are doing the unthinkable: torturing patients in their care.

Chilling images covertly filmed by the man, who risked his life to bring the plight of what he claims are civilian patients to world attention, are to be broadcast on Channel 4 News tonight.

The grainy footage from the Homs military hospital depicts wards full of wounded men, blindfolded and shackled to their beds. Some bear marks of extreme beating. The apparent instruments of torture – a rubber whip and electrical cable – lie openly on a table in one of the wards. 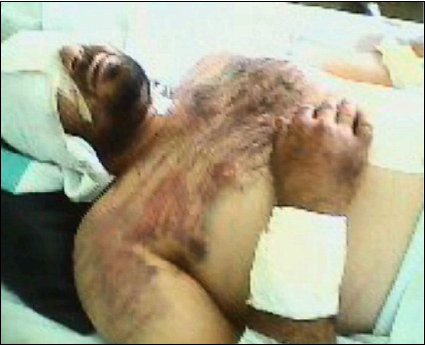 On the orders of the Syrian government, all of those shot or injured during protests in Homs must be brought to the military hospital where staff are in league with the secret police.
The whistleblower claims many are whipped and beaten in their beds – and worse.
The grim evidence of serious abuse raises the question of where the hundreds of injured civilians from the district of Baba Amr in Homs will be taken once the Red Cross finally negotiates their evacuation.
The hospital employee says he attempted several times to stop what he called ‘the shameful things’ which were happening in the hospital but that after being condemned as a ‘traitor’, he walked out in disgust and never went back.
‘I have seen detainees being tortured by electrocution, whipping, beating with batons, and by breaking their legs,’ he told ‘Mani’, a French photojournalist who risked his own life smuggling the footage out of Syria.
‘They twist the feet until the leg breaks. They perform operations without anesthetics. I saw them slamming detainees’ heads against walls. They shackle the patients to beds. They deny them water.’

Shackled: A patient's arm chained to his bed exposes torture of Assad regime 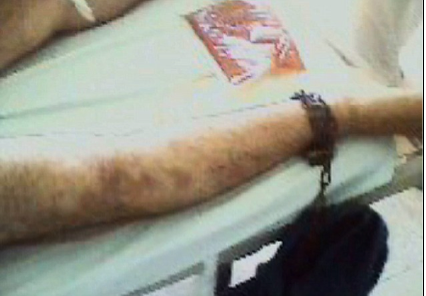 The employee says he witnessed abuse by civilian and military surgeons at the hospital and by other medical staff, including male nurses. He has provided the names of all those he claims worked hand-in-glove with Syrian soldiers and the feared mukhabarat secret police.
Sometimes, he says, he heard patients screaming while being kicked or beaten. The abuse took place, he claims, in the hospital’s ambulance section, its prison wards, the X-ray department and even in the intensive care unit.
‘Sometimes they have to amputate limbs and they go gangrenous because they don’t prescribe antibiotics,’ he said.
The footage, filmed within the last three months, confirms what victims of such treatment have long claimed, but the Syrian regime has forcefully denied.

This weekend the United Nations Secretary General, Ban Ki-Moon, said he was receiving ‘grisly reports of summary executions, arbitrary detentions and torture’ from Homs.
The UN human rights commissioner has already recommended to the Security Council that the Syrian regime be referred to the International Criminal Court, based on evidence which constitutes crimes against humanity – including acts of torture. 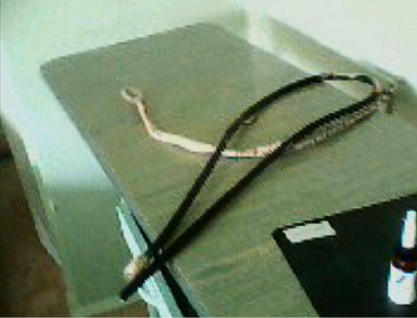 Inhuman: A rubber whip and cable on the ward with some
reports of patients being electrocuted, whipped and beaten.

Cilina Nasser, author of an Amnesty International report on mistreatment and torture in Syrian military and state-run hospitals – including the military hospital in Homs – was amazed that anyone would risk his life to film in the torture wards.
‘This is the first time we have video evidence to corroborate these claims,’ she said. ‘The new evidence is horrific. Hospitals should be safe places for anyone who needs medical attention and treatment, but it seems that wounded people in Syria have no safe place to go.’
Photojournalist Mani, who spent most of January and February in Homs, said: ‘Ordinary Syrians now consider it too dangerous to go to state-run hospitals if they’re injured. Most opt for hopelessly under-equipped makeshift backstreet clinics.
‘I met a 15-year-old boy who had been shot in the leg by a sniper. His father told me he was too afraid to bring his son to hospital. Even though he was in danger of losing his leg, the boy was treated in his own home by a nurse.’ Mani said the employee was distraught at what he had witnessed.
‘He wept as he talked to me about the torture and the fact that he was powerless to prevent it.’
The hospital employee insisted there were some ‘decent doctors’ who refused to participate in the abuse of patients, but, he said, they were under constant and close surveillance. He claimed that while some of the victims in the military hospital are soldiers who refused to follow orders, most are civilians. Some, he said, had nothing to do with anti-regime demonstrations; others were wounded when their neighborhoods were attacked.

Many of those injured, he said, were kept alive so they could be interrogated.
Others were admitted to the hospital simply to revive them between torture sessions. ‘Some of the detainees used to be taken from the hospital to the prison. They’d bring them back either dead or with a brain hemorrhage.

‘The youngest I saw was 14 or 15 years old. Many detainees’ names were removed from emergency admissions lists so that no one would know where they were. There were no names. Just numbers.’

Can You Just Sit There - Without Saying Something?
If you are as upset as we are then . .
COMMENT  NOW
You Type It & We'll Print It
Let's Make a Difference
(No Links - No Emails)