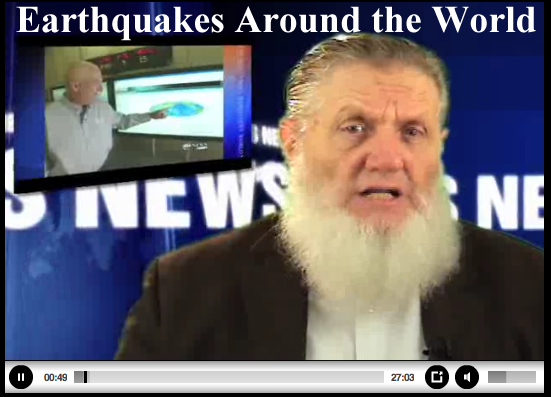 Around The World & Around the Corner

Learn more of what Islam and Prophet Muhammad peace be upon him, predicted about all of this - over 1,400 years ago.
Watch Yusuf Estes, Abu Hafsa, Harun Yahya and Mutahhir Sabree - LIVE - on Guide US TV. (Live Updates Every Hour - below)

And check out the two huge earthquakes happening every day!

Watch this video and decide for yourself - Are we living in the LAST DAYS?

Initially exact magnitude and depth of these two earthquakes caused discrepancies in reports.

The PTWC gave out initial info on both of these two separate earthquakes, as having magnitudes of 7.4 and 7.5.

According to the U.S. Geological Survey reported earthquakes over 7.1 Magnitude Richter scale at depths reported up to 69.2 miles deep.

Yet it is clear, there is something related between these incidents. Experts continue looking into the similarities and comparing the oddities for further study.

Tsunami reports are not always issued for each and every earthquake, even when there may occur "a very small wave" reported just after the first earthquake. If there is no damage reported for these earthquakes by these "small waves" then usually nothing will be stated.

What will happen next regarding earthquakes? Your guess is as good as anyone else's. But remember the saying of the prophet Muhammad, peace be upon him, regarding the increase of the earthquakes in the Last Days.

And of course, the clear reference in the Quran to earthquakes of great magnitudes in surah Al Zalzalah, (The Earthquakes).