Mutahhir Sabree has long been a Muslim American. He wasn't always a Muslim. In fact, he started out in the Catholic Church as an alter boy and candidate for the priesthood. His passion was always to seek out truth and share it with others.

However, when he asked questions about the rituals, beliefs and customs of the Catholic church:

But he was disappointed when he found no answers.

After he turned his focus toward the Creator of the heaveans and earth and asked for guidance, Allah guided him to Islam.

As such he spent a good portion of his life explaning Islam to other non-Muslims. Along the way he picked up the concept of sharing the message of Islam with people in prisons. 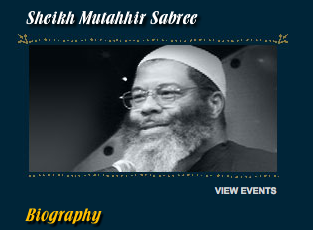 Imam Sabree has served as imam for the South Carolina Department of Corrections for many years. He has also served people of the Muslim faith in federal correctional institutions as well.

He has received numerous awards and recommendations for his constant service and contributions for all faiths serving communities throughout the United States and Canada.

Be sure to hear all about this from him on weekends in our chatroom, inshallah - www.chatislam.com

Be sure to join us on Guide US TV for his explanation of the 40 Hadeeth of Imam Anawawi: www.GuideUS.TV/live