Did Homeland Security Spy on the N.O.I.?

The Nation of Islam (NOI) was established in 1931, by a man claiming to be "God on earth". He said his name was Wallace D. Fard. (full story at end of this article). Let's see what the "Home Boys" at Homeland Security have been up to... (according to official documents): ,

The Department of Homeland Security improperly gathered intelligence on the Nation of Islam for eight months in 2007 when the leader of the black Muslim group, Louis Farrakhan, was in poor health and appeared to be yielding power, according to government documents released Wednesday. 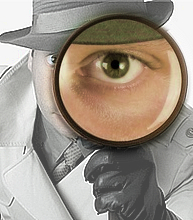 The intelligence gathering violated domestic spying rules because analysts took longer than 180 days to determine whether the U.S-based group or its American members posed a terrorist threat. Analysts also disseminated their report too broadly, according to documents obtained under the Freedom of Information Act (FOIA) by the Electronic Frontier Foundation, a civil liberties group.

The disclosure was included in hundreds of heavily redacted pages released by the Justice Department as part of long-standing FOIA lawsuits about the government's policies on terrorist surveillance, detention and treatment since the Sept. 11, 2001, attacks. It marks the latest case of inappropriate domestic spying under rules that were expanded after the terror attacks to give intelligence agencies more latitude.

In a written statement, Homeland Security (DHS) spokesman Matthew Chandler said the agency has since implemented "a strong and rigorous system of safeguards and oversight to ensure similar products are neither created nor distributed."

The agency, he said, "is fully committed to securing the nation from terrorist attacks and other threats, and we take very seriously our responsibility to protect the civil rights and liberties of the American people." The 2007 study, titled "Nation of Islam: Uncertain Leadership Succession Poses Risks," was recalled by agency lawyers within hours. The lawyers said it was not reviewed by the department's intelligence chief before release.

Charles E. Allen, who was DHS undersecretary for intelligence and analysis at the time, said that although violations were unintentional and inadvertent -- only publicly available information was collected -- the report should never have been issued.

"The [Nation of Islam] organization -- despite its highly volatile and extreme rhetoric -- has neither advocated violence nor engaged in violence," Allen wrote in a March 2008 memo. "Moreover, we have no indications that it will change its goals and priorities, even if there is a near-term change in the organization's leadership."

Telephone messages for Ishmael Muhammad, a spokesman for the Nation of Islam in Chicago, were not immediately returned.

Allen, now a consultant with the Chertoff Group, said it was important for U.S. authorities not to limit unnecessarily their ability to monitor people who are moving from extreme ideas toward ideologically motivated violence, noting that al-Qaeda in 2006 shifted its strategy to train North Americans to engage in attacks.

"It's a fine line," Allen said. "We should not make the rules absolutely rigid, and they should be reviewed from time to time."

Newly released documents also indicate the Justice Department considered bringing treason charges against John Walker Lindh, the Californian who became known as "the American Taliban" after he was captured in Afghanistan in 2001.
That was contained in a December 2001 memo by John Yoo, a deputy assistant attorney general, and was released as part of FOIA litigation by the American Civil Liberties Union. In the memo, Yoo wrote that "treason cases have been rare in the Nation's history," but that Lindh's conduct "may fit the elements."

The Nation of Islam (NOI), whose members are widely referred to as Black Muslims, was founded in Detroit in 1930 by Wallace D. Fard. An enigmatic figure with mysterious origins, Fard surfaced in the city in 1929 and attracted the attention of poor blacks as he walked the streets selling fabrics and expounding novel religious and political messages. Fard skillfully blended tenets of traditional Islam with anti-white preachments that resonated with the psychological and social needs of economically strapped blacks. This group, frustrated by the inability of traditional religions to generate change in their lives and keenly aware of the impact of racism on their opportunities, was drawn to Fard's message.

The cosmology of the NOI was exotic but carefully crafted to offer a millenarian vision to African Americans, promising a future apocalypse for the evil (whites) and salvation to the true believers (blacks or "Original People"). According to Fard's theology, an insane scientist, Yakub, who lived 6,000 years ago, grafted a new human species from the Original People. Over time, the grafted species mutated and became white. An angry God looked with disfavor on the manipulations of Yakub and decreed that the white race of people he created would rule for 6,000 years and then be vanquished. At that point, the Original People would inherit a world where true nirvana would reign.

Basically, we find the teachings to be:
1. God is a black man (unacceptable to real Islam)
2. God walked on the earth in 1931 (unbelieveable)
3. White people were created by a mad scientist grafting people together 6,000 years ago (?)
4. White man is the devil (no comment)
5. God disguised himself as a white man to fool the people so he would not be killed by the white devils (no comment)
6. White man is the devil (racist)
7. "Master Fard Muhammad" (his made up name) chose Elijah Poole as his "prophet" changing his name to Elijah Mohamed
7. Original People (OPs?) would inherit the earth after 6,000 years is up.
8. 6,000 years is almost up and the end is near (they have been saying this for 80 years)

Note the following -
There is nothing in the original teachings of these people that could be represented as authentic Islam from the Prophet Muhammad, peace be upon him.
Allah (God) is nothing like the way this man represented. See: www.GodAllah.com
Islam is not a man-made religion. See: www.WhatsIslam.com
The Prophet Muhammad of real Islam lived over 1,400 years ago and he said no new prophet would come after him and no new religion from God would come after him. See: www.ProphetOfIslam.com
Regarding the vairous groups and sects that have popped up claiming to be the saved groupd of Islam, this was predicted by the Prophet Muhammad, peace be upon him, and he even described what kind of condition the Muslims would be in at the time this happens, as well as letting us know who the real "saved group" of Islam would be.
See: www.IslamTomorrow.com/groups