Earthquakes: A Test For Believers 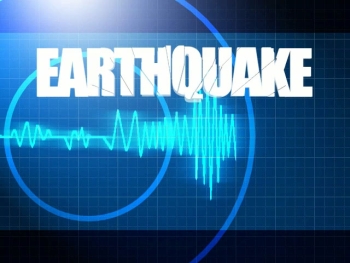 How does an earthquake, a tsunami, tornado or a hurricane increase one's faith? Regardless of the religion, when violent acts of nature strike and catch us unaware, almost all of us think about our own frail condition in this vast universe and most often turn to our faith as a way of dealing with these tremendous events.

Almost no power, no fuel, no clean water, nothing - but faith and hope. Faith in God and hope in the future.
Somethings still go on for believers - like worship -
Sunday the adhan was still being called for dhuhr salat and whle the Muslims were turning out for worship, the Christians were returning back from church to what was once home - in Padang, Indonesia.
Muslims working alongside Christians cleaning up and clearing out from under tons of debris left by Wednesday's 7.6 quake show the rest of the world how faith can endure, survive and bring people together rather than going to war against each other.

Nearly a million people were living in this port city before the quake and now with thousands dead or missing, all anyone can do is look forward.
"Everything that happens is a test from God to us" says one woman who survived other quakes in the past. She further explains, "I will just pray and be thankful I can enjoy whatever I can" said Uly Marisa, an employee at the local radio station in Padang. But Wednesday's magnitude 7.6 quake, which killed hundreds of people, was the worst by far. It left her deeply shaken and reflective.

Tourism is definitely going to suffer, as will most of Padang's financial prospects. But that doesn't stop the believers from their worship, their prayers and belief in a better tomorrow.

As people start to rebuild their lives, they're searching for answers, grappling with the enormity of their loss and doing what they can to make sense of it all.

Very few people in this impoverished country have insurance. And Indonesia's tourism industry, an economic cornerstone, is battered. An estimated 70% of hotel rooms in Padang, on Sumatra island, were destroyed. Power is intermittent, and fuel and clean water remain scarce.

Experts believe thousands of people are still buried under collapsed buildings, and hopes of finding them alive are fading. The crowds that ringed rescue operations at collapsed schools and hotels in recent days have all but dispersed. Torrential rains have hampered rescue efforts. Most emergency crews have shifted their efforts to identifying and burying bodies.

The massive international effort, involving more than a dozen governments and 72 aid organizations, is fanning out beyond Padang to rural villages, where thousands are homeless and hungry after quake-triggered landslides blocked access roads, demolished homes and swallowed at least three villages.

In the hills of Padang Pariaman district, about 35 miles from Padang, entire hillsides were shaken loose.

"We can be sure that [the people there] are dead," Vice President Jusuf Kalla told reporters. "So now we are waiting for burials."

About 200 to 300 wedding guests who fled a restaurant in Jumanak village were buried by a landslide, including the bride, her 15-year-old brother, Iseh, told the Associated Press.

Those who survived in Jumanak said they still hadn't seen any rescue crews four days after the earthquake, with some residents reportedly reduced to digging out rotting corpses with their bare hands.

The full death toll remains undetermined. The government at one point said 715 were dead and 3,000 were missing. But Sunday, it changed its tally to 603 killed, with 960 more missing and believed dead.

Still, the residents of Padang -- street vendors as well as top provincial officials -- are nothing if not resilient.

"We are still scared, but what can we do," said Padang native Heru Marta, 38, a handyman. "Life goes on."

Their insecurity takes different forms. Masni Fanshuri, 30, a law student and music teacher, carries a shortwave radio and backpack filled with his most important documents. It's a habit he picked up after a 2005 earthquake left him with a broken leg; he was in traction for two months.

This week, he said, the radio let him know there was no risk of a tsunami and helped him shepherd his choir students to safety.

Masni hopes administrators will correct some obvious problems laid bare by the disaster, including substandard construction that resulted in hundreds of deaths and fuel supply problems that developed after roads were blocked by mudslides.

"The lesson is no matter how hard it is or how scared you are, you have to think logically," he said.

In Padang's Chinatown, the city's oldest and most affluent neighborhood and also its hardest-hit, rows of three-story shop houses are now piles of rubble. Cars are pinned under collapsed buildings. Heaps of scrap metal and debris continue to block roads.

Residents, still not quite able to believe all that's happened, stare at the buildings they once knew. "That used to be a pet shop," said one resident. "I looked at a golden retriever there last week."

The local government either agrees or has been arm-twisted into taking less central government help. West Sumatra officials announced Sunday that they would need only one month of aid, not the two months Jakarta promised.

"We expect in one month to finish with aid," said Vice Gov. H. Marlis Rahman. "And recovery will begin in one month."

Rahman said all new building projects will require permits based on strict national standards. "West Sumatra is on an earthquake fault," he said. "We have to expect this and be ready."

James Hellyward, head of the provincial tourism office, on Sunday announced a campaign to "convince the world we are OK."

Rahman noted that businesses in the main markets were starting to reopen. "The people of Padang have started to revive," he said.

With each passing day without another aftershock, people become less jittery. The first night after the earthquake, Masni and his friends saw bodies everywhere, including some being transported on bedsheets.

"I wanted to cry that night, but I couldn't," Masni said. "It was only last night that I managed to cry. Only now can I start to think the worst is over."

McDermid is a special correspondent.