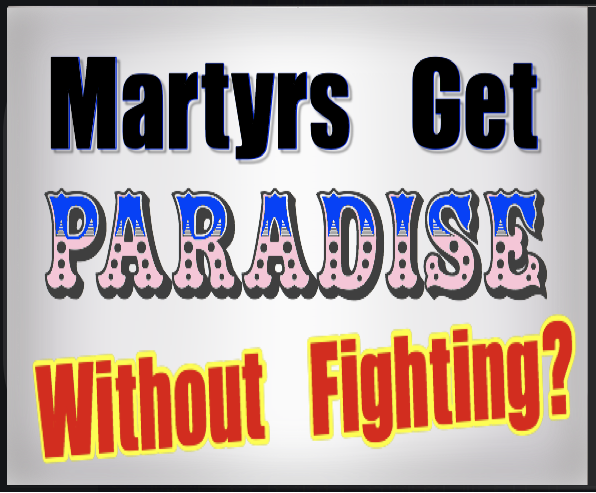 Not Just Another 'Jihad' Myth

Shuhadat (martyrs for Islam) get very special treatment in the Next Life.

But people do not know this very high status is not just being killed in battle or fighting against enemies with weapons. Let's find out how they get this great treatment in Paradise, shall we?

1353. Abu Hurairah (May Allah be pleased with him) reported: The Messenger of Allah (peace be with him) said, "The martyrs are of five kinds: One who dies of the plague; one who dies of disease of his belly; the drowned; one who dies under the debris (of construction, etc.), and one who dies while fighting in the way of Allah.''
[Al-Bukhari and Muslim].

Commentary:  The Hadith mentioned four categories of people, besides those who were slain on the battlefield, whom Allah will, by His Special Grace, give on the Day of Judgement an award similar to martyrs on condition that they are true believers and practicing Muslims. In some other Ahadith, certain other persons have also been mentioned who will be given the status of martyrs by Allah. There is no contradiction in these Ahadith for the reason that first of all the Prophet (peace be with him) was told about five categories of martyrs disclosed by him. Almighty Allah added some more people to them which were also mentioned by him. The real Shaheed is one who voluntarily gives his life for the sake of Allah provided that he wholeheartedly fights on the battlefield.

(Editor's Note) This Hadith shows the care Allah has for this Ummah, which is the best Ummah of mankind.

Commentary:  "He who dies naturally in the Cause of Allah'', here signifies such a person who does not die because of his being killed in the war by the sword, lance, bullet, etc., but meets the death on account of some other causes while going for Jihad such as falling from the horse, or who dies while defending his family or property, or defending other Muslims against attackers or robbers, etc. Such a person will also be a martyr.

1355. `Abdullah bin `Amr bin Al-`As (May Allah be pleased with them) reported: The Messenger of Allah (peace be with him) said, "He who is killed while defending his property is a martyr.''

Commentary:  The Hadith highlights the fact that whoever gets killed in an effort to protect his property is a martyr.

Commentary: Those ten Companions of the Prophet (peace be with him) whom he gave the glad tidings of entering Jannah are known as "Al Asharat ul Mubashsharuna bil Jannah". They are Abu Bakr Siddiq, `Umar bin Al-Khattab, `Uthman bin `Affan, `Ali bin Abu Talib, Talhah bin Ubaidullah, Zubair bin Al-`Awam, `Abdur-Rahman bin `Auf, Sa`d bin Abu Waqas, Abu `Ubaidah bin AlJarrah and the narrator of this Hadith, i.e., Sa`id bin Zaid, may Allah be pleased with all of them. The Prophet (peace be with him) also foretold that some other people will enter Jannah, but these ten people are called Al-Asharatul-Mubashsharuna bil-Jannah for the reason that the prophecy about these ten people was made at one time, in a single Hadith. This Hadith includes the names of some other people also who will be given the reward of martyrdom. 1357. Abu Hurairah (May Allah be pleased with him) reported:

Commentary: We learn from this Hadith that in the course of struggling to protect one's life and property, it is quite fair to kill a dacoit, robber or plunderer. Such a killing is not deemed a sin. In case he is a Muslim, he will go to Jannah after suffering the punishment of his attacking a Muslim. But if he regards the act of attacking Muslims and encroaching upon their property lawful, he will be in Hell forever. It should be borne in mind that if a person dies while struggling to protect his life and property, he will be granted the status of a martyr, with the difference that a martyr of this kind will be given bath and funeral prayer because he is a martyr by Divine order not by his own will and desire. He who is martyred in Jihad at the battlefield is exempted from bath and the funeral prayer.