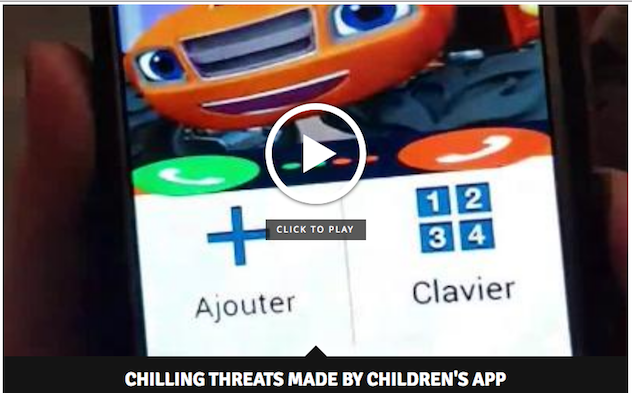 At first, the voice on the App sounds OK - "Hi Kids! I'm your new friend! You see, I want to play with you kids. Maybe we can perform some fun games together."

But then, the voice changes and gets really scary - "You look afraid - Is it this knife - in my hands?? Makes you a little nervous?? This knife is going to IMPROVE YOUR LOOKS - WHEN IT'S STICKING OUT OF YOU!!"

Online search engine and all around browser (Chrome) - The Google has banned potentially dangerous App - NOT KID SAFE (not human safe?)

Monster Machine App - threatens, scares and intimidates children (of all ages) and it banned by Google from their "Play Store" after parents hear scary voice say horrible things - TO THEIR KIDS!

Nickelodeon show ‘Blaze And The Monster Machines’ - APP looks like an official product or characture of a talking car - But when you make the call to the cartoon car - it really takes you for a horrifiying ride.

A mom in UK,  was upset when she overheard the sinister voice coming from her child's phone in the next room.

She made a video, then posted it on Facebook - to warn other parents of the potential dangers of any apps downloaded from the "Play Store".

Another concerned mother wrote on the Facebook post: “Seen a video being shared about on Facebook about a kids app on play store called ‘Call Blaze And The Monster Machines 2018’ thought it was fake, turns out it wasn’t.

“They obviously don’t check the apps before they allow them on the Play store.

“There are plenty of parents out there that just let their kids download random stuff and don’t check it before. This is a perfect example.”

One mom posted: “I’m so happy you shared this, I nearly downloaded it for (her son) it’s absolutely vile I'll report it.”

Another mom says: “This is just wrong, disgusting. We need to make parents aware of this.”

Finally Google banned the app from its Google Play.

A Google spokesman said - “We have a set of policies designed to provide a great experience for users and developers and we act quickly to remove apps from Google Play that violate those policies.”

A Nickelodeon representative said, “We were alerted to the illicit ‘Blaze And The Monsters Machines’ app yesterday along with a range of other content from the same individual. The safety of kids and families are of paramount importance to us.

Nickelodeon worked with Google Play quickly to remove all illegal apps - (they should have never allowed them to start with - says one commentator).

“Nickelodeon worked as a matter of urgency with Google Play to have all the illegal apps removed. All offending content has now been removed - says spokespeople for the companies.

What should Muslims be doing about all this? - Typically, Muslims try their best to ward off evil in many forms. But this new stuff, online, social media, texting, Facebook, Play Store, Apps, etc. is out of the range of many of our scholars and even some Muslim parents.

We need to be more aware of what is going on. We need to have more of our imams, speakers and scholars - within the grasp and age of modern technology - to speak to us from the mimbars and pulpits to be sure we are all in touch with what is REALLY GOING ON