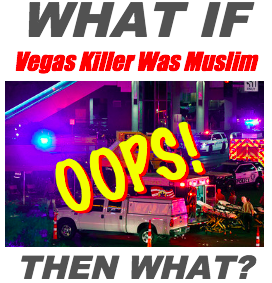 If only the Vegas killer had been Muslim … Thomas Friedman says lawmakers are unlikely to act after the latest massacre, so it’s up to the rest of us to find ways to change gun laws.

If only Stephen Paddock had been a Muslim ...

If only he shouted “Allahu akbar” before opening fire on all those concertgoers, in Las Vegas ...

If only he had been a member of ISIS ...

If we just had a picture of him posing with a Quran in one hand and his semiautomatic rifle in the other ...

If all of that had happened - then no one could tell us not to dishonor the victims and “politicize” Paddock’s mass murder by talking about preventive remedies.

But what happens when the COUNTRY OF ORIGIN - IS US? 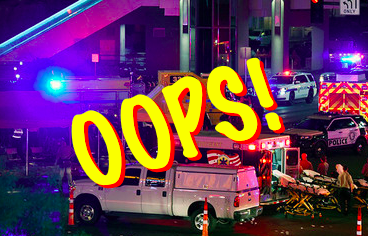 What happens when the killer was only a disturbed American armed to the teeth with military-style weapons that he bought legally or acquired easily because of us and our crazy lax gun laws?

Then we know what happens: The president and the Republican Party go into overdrive to ensure that nothing happens. Then they insist — unlike with every ISIS-related terror attack — that the event must not be “politicized.”

We will turn the world upside down to track down the last Islamic State fighter in Syria — deploying B-52s, cruise missiles, F-15s, F-22s, F-35s and U2s.

We will ask our best young men and women to make the ultimate sacrifice to kill or capture every last terrorist.

And how many Americans has the Islamic State killed in the Middle East?

And our president never stops telling us that when it comes to ISIS, defeat is not an option, mercy is not on the menu and he is so tough he even has a defense secretary nicknamed “Mad Dog.”

But when fighting the NRA — the National Rifle Association, which more than any other group has prevented the imposition of common-sense gun-control laws — victory is not an option, moderation is not on the menu and the president and the Republican Party have no mad dogs, only pussycats.

And they will not ask themselves to make even the smallest sacrifice — one that might risk their seats in Congress — to stand up for legislation that might make it just a little harder for an American to stockpile an arsenal like Paddock did, including 42 guns, some of them assault rifles — 23 in his hotel room and 19 at his home — as well as thousands of rounds of ammunition and some “electronic devices.”

On crushing ISIS, our president and his party are all in.... On asking the NRA for even the tiniest moderation, they are AWOL. No matter how many innocents are fatally shot —no matter even that one of their own congressional leaders was critically wounded playing baseball — it’s never time to discuss any serious policy measures to mitigate gun violence.

And in the wake of last month’s unprecedented hurricanes in the Atlantic — that wrought over $200 billion of damage on Houston and Puerto Rico, not to mention smaller cities — Scott Pruitt, Trump’s head of the Environmental Protection Agency, also told us that it was not the time to discuss “the cause and effect” of these super-storms and how to mitigate their damage. We need to focus on helping the victims, he said. But for Pruitt, we know, it’s never time to take climate change seriously.

To take ISIS seriously abroad, but then to do nothing to mitigate these other real threats to our backyards, concert venues and coastal cities, is utter madness.

It’s also corrupt. Because it’s driven by money and greed — by gunmakers and gun-sellers and oil and coal companies, and all the legislators and regulators they’ve bought and paid to keep silent. They know full well most Americans don’t want to take away people’s rights to hunt or defend themselves. All we want to take away is the right of someone to amass a military arsenal at home and a hotel room and use it on innocent Americans.

What should we do? Forget about persuading these legislators. They are not confused or under-informed.

They are either bought or intimidated. Because no honest & decent American lawmaker can look at Las Vegas and Puerto Rico today and say, “I think the smartest and most prudent thing to do for our kids is to - just do nothing.”

So there is only one remedy: Get power.

If you are as fed up as I am, then register someone to vote or run for office yourself or donate money to someone running to replace these cowardly legislators with a majority for common-sense gun laws.

This is about raw power, not persuasion. And the first chance we have to change the balance of power is the 2018 midterm elections.

Forget about trying to get anything done before then.