READ ALL ABOUT IT! 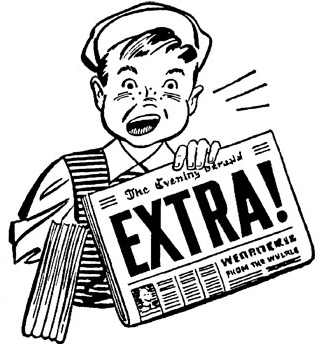 What was it like in America back when Yusuf Estes was still in school? Did they have cars back then? Did they have electricity? -- Did they even have houses or just tents? (LOL)

(from the Empire State Building)

“A nickel just ain’t what it used to be!”

Everything costs more today than ever before. Wages are on the rise across the country, but so are costs of living.

Below are some Prices for UK guides in Pounds Sterling -

Unemployment dropped down to 3.3% across America as more and more find jobs. Labor forces continue to grow across the country as large factories return back to making appliances and clothes instead of making war.

Tons of Cars From “Over There”

Europe exporting tons of cars to U.S. — across the “pond”, like Volkswagens, Austin Martin and a few Rolls Royces from Great Britain. (Think those Japanese will come up with something?)

Kids Get More Than Ever Before

Encyclopedia sets, guitar and piano lessons on the rise for youngsters, to improve their little minds.

Now, with over three thousand dollars yearly income, clothes and shoes are not the only things to shop for. Sales of cars, houses, musical instruments and even swimming pools are increasing in the U.S.

Cars Top Out with Tops Off

Convertible car sales jump through the roof (or where the roof used to be) with optional powerhouse engines, 2-tone paint jobs, white wall tires and even blinking light turn signals. Drivers say they’re sick of sticking their left hands out the window in the rain.

Color TV was first broadcast from atop the Empire State Building on June 25, 1951.

U.S. moves atomic bomb development and testing from Pacific islands to Nevada, just 65 miles from Las Vegas. Comedians on the Vegas strip, warned “Not to Bomb Out” (humor).