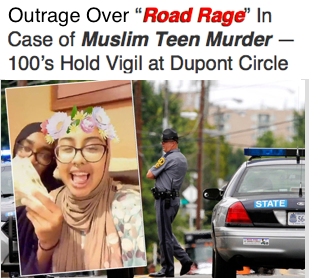 Just 3 days after Nabra Hassanen was beaten to death with a metal bat, 100’s of Muslims and non-Muslims were holding a vigil at the nation’s famous DuPont Circle yesterday, Tuesday June 21.

One outraged speaker at “Justice for Nabra” spoke out clear, “We are not letting the Fairfax police tell us this was just a case of road rage”.

6 other communities around the country offered vigils of Justice for Nabra” — Imam Ali told everyone, “It is a moment that we look deep in our heart and gather strength to let this not happen again”.

#JusticeforNabra was trending on Twitter by the time the vigil finished. Tweets came in from many expressing their concerns and frustrations over the way local police were handling the case.

Arielle Montgomery spoke up saying she did not believer it was a case of “road rage” and “a lot of us don’t think it was”.

They say Torres did attack Nabra, but it was while driving by a group of “young people” (no mention of them wearing the hijab or on the way back to the mosque nearby).

Then, according to police Torres is having an argument that turns physical and he somehow looses his temper . . .

But the crowd “ain’t buying it”.

Both non-Muslims and Muslims alike are complaining saying, “This is more than just a private matter, this a public matter and we all need to take a stand on this,” said Karla Mantilla.

A vigil is also scheduled for Nabra on Wednesday at 6:30 p.m. in Reston, Virginia — and other places around the country.

Salatul Janaza will be held for Nabra today (Wednesday) after the Dhuhr salat, at 1:30 PM — before the vigil, at ADAMS Center in Sterling, VA. just outside our nation’s capitol.