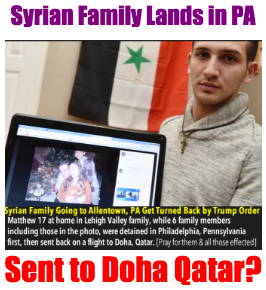 ISLAM NEWSROOM -- "A Typical (or Not Typical) Outcome"

Assali and Sarmad, his wife, remodeled and furnished a neat home on 2nd Street in Allentown, Pennsylvania, for his 2 brothers and their families.

The whole place got a total workover and they got it ready for their relatives from Syria. Everyone was all excited about them coming in to the Philadelphia International Airport on Saturday.

But then while they were on the way to pick them up, Assali got a call from the U.S. Customs and Border Protection unit. And official there told him not to come, because they had already sent back their families back to Doha, Qatar.

Their relatives were held in Philadelphia for some time, before being sent back to their point of origin, in Doha, Qatar. 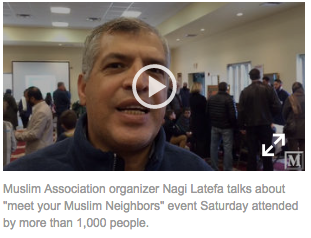 Nagi Latefa is excited about the turnout for the "Meet Your Muslim Neighbors" event. The event is annual one and this year had over 1,000 showed up visit and to learn more about real Islam and the Muslims.

-- President Donald Trump signed an executive order Friday to ban any non-American citizens from Syria, Iran, Sudan, Libya, Iraq, Somalia or Yemen from entering the country for the next 3 months.

Trump claims his ban is needed to keep out "radical Islamic terrorists." Not everyone agrees with him on that issue. Trump’s order is aimed at Muslims from seven particular countries and has really sparked confusion and even outrage.

In fact on Saturday night, one federal judge issued an emergency halt on Trump’s ban to temporarily allow people who land in the U.S. with proper credentials to be able to stay.

But too late for the Assali family. By that time of night when the judge issued the halt, their plane was already on route back to Doha.

Total six relatives from age 17 to 61 — and they are not even Muslims. 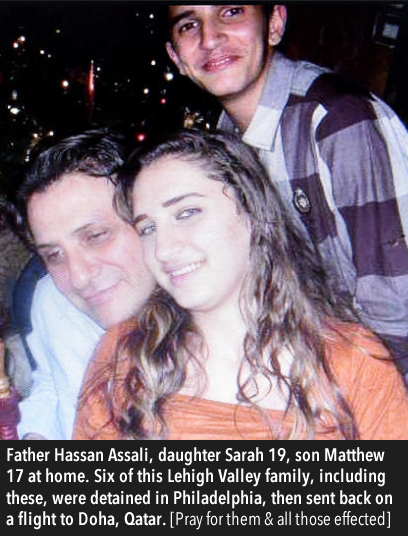 Note the Christmas tree in the background - They are Christians!

They are Christians from Damascus. They are not refugees, they easily got their visas and paperwork for the green cards.

All the same, the family was given a simple choice: “Get out today, or risk loosing your visas completely.”

"They felt afraid, so they turned around," Sarah said Saturday afternoon. "Now they're on an 18-hour flight right back to Doha."

Naturally, thousands of others have been turned back in the last 24 hours, as many refugees and their families are trying to work with legal advisors and aid workers to see what can be done.

Still others never made here to start with, as they were blocked from getting aboard flights heading for the United States.

U.S. Rep. Charle Dent, R-15th District, says he called the White House on Saturday after speaking to the Assalis, who live in Allentown.

Dent represents much of the Lehigh Valley area and he reported that, “It appears this order has been rushed through without full consideration of the many nuances of immigration policy that can be life or death for vulnerable people across the world”.

”This is not an acceptable situation, and I certainly urge the administration to halt enforcement of this order until a more deliberate policy can be instated," he said. "I think that's really the issue right now."

According the executive order signed by President Trump, all refugees are banned from the U.S. for 4 months, with emphasis on the Syrian refugees. This comes just after 12,000 Syrian refugees got resettled here in the U.S. after running from the horrors of war, dictatorship, oppression, hunger and religious issues.

The Assalis’ family were approved last month and could have come easily at that time. Being Christian they wanted to spend one last Christmas in Damascus along with relatives who are not ready for the journey to the U.S.

"It keeps getting harder and harder to live there," said Assail’s daughter. "The economy is shot, no one is buying anything, and people keep fleeing."

In America, her relatives hoped to get jobs and send their children to college, just as Ghassan and Sarmad did. Sarah, Assali’s daughter and Joseph both are graduates of Parkland High School. Sarah is a third-year medical student in Ohio, and Joseph Assali is a third-year undergraduate in Philadelphia.

Sarah said, she and her family want to have a life here in the U.S. for themselves, like other immigrants have over the centuries.

Trump's order singled out Syrians for the most aggressive ban, ordering that anyone from that country, including those fleeing civil war, are indefinitely blocked from coming to the United States.

After Trump signed the documents, he is quoted as saying: "It's not a Muslim ban, but we were totally prepared. You see it at the airports, you see it all over. It’s working out nicely.”

Dent commented on Saturday, this vetting process for refugees being used here is "actually fairly thorough" and "fairly robust."

"We have already called the White House trying to get them to revisit this issue," Dent added. "On an executive order like this, I hope the Justice Department was consulted, as with the State Department, as well as Homeland Security and Defense."

The Department of Homeland Security and White House officials were not available for comment Saturday.

"I am in full support of President Trump's actions, which I believe are only prudent, while we work on a system that allows us to verify the identity and background of applicants," said Barletta on Saturday.

One federal official told Associated Press the order does have an exemption applied to foreigners whose entry into the United States is in the national interest. It was not immediately clear how that exemption might be applied.

Pennsylvania Senator Bob Casey, a Democrat, tweeted Saturday evening that his office has contacted Homeland Security "to get to the bottom of the situation," regarding the Assalis.

Meanwhile, the Assali family tell us their relatives were relieved just to make their first flight out of Beirut, where heavy snow fell this weekend. They never expected that the Trump executive order would apply to them.

Sarmad had planned a big dinner and celebration Saturday night.

Instead, they waited for word from Qatar — and wondered what will happen next.