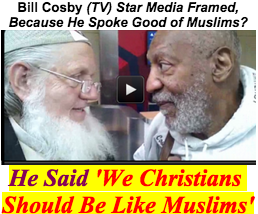 Nearly 80 Years Old - Known Around the World - TV Actor, Public Figure & Influential Speaker - Accused of sex charges - Did it turn out to be false?

We do know why they tried to frame him and why they made those false claims - all of a sudden!

A man who is nearly 80 years old with a perfect record - all of his life.

Where are those women who came tried to accuse Cosby of committing sexual assaults now?

Fact - Cosby was never  officially charged after any of these allegations.

The accusations have remade Cosby's public persona and resulted in cancelled projects and scrappd tour dates.

'Who is the real victim?'

Mrs. Cosby's statement came days after Bill Cosby himself broke his silence to Stacy Brown, a freelance reporter for the New York Post and other outlets.

Mrs. Cosby's statement asked the public to think about who could be the true victims of these allegations -- clearly insinuating that she and her husband are.

"None of us will ever want to be in the position of attacking a victim," she wrote.
"But the question should be asked -- who is the victim?"

Bill Cosby has done more for the training and development of youngsters around the world than almost anyone you can think of.

Come on - this man always was a good and trusted family man.
So why all of this clamor against him now??

- Bill Cosby says some amazing and wonderful things about Muslims!
- BUT LOOK WHAT HAPPENED TO HIM IN THE MEDIA -

Why all those sex charges? All at once? At his age?
What did he do to get the media & press so mad?

Well, here's the facts: Bill Cosby met Yusuf Estes in an air plane and said some nice things about Muslims. He even tried to learn to say some Muslim greetings in Arabic.

And he also learned some things about real Islam from Yusuf Estes (video below). 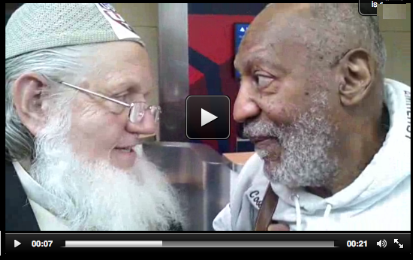 If this video goes viral other famous people
can see it & learn more about Islam, inshallah

When did it all start? What was it really all about?

Look for yourself at what Bill Cosby publicly told viewers on National television:

(NOTICE: everything highlighted in YELLOW - is that why they are "out to get Bill Cosby"?)

"I am a Christian. But -
Muslims are misunderstood. Intentionally misunderstood.
We should all be more like them.
They make sense, especially with their children.
There is no other group like Muslims.
They put so much effort into teaching children the right things!
They don't smoke, they don't drink or do alcohol
They protect their women, they command respect.
And what do these other people (Christians) do?
Christians complain about them! They criticize them!
It would be a better world - if we emulated them"

Yusuf Estes spoke with Bill Cosby on Guide US TV about how Muslims greet each other with peace.

And there's more! Read what he said about Muslims:

We ask Allah to guide and protect those who are coming close to Islam, ameen. We hope the media and their 'Islam-o-phobia' doesn't attack Bill Cosby after the good things he has voiced about Allah's religion.

Now - Watch Yusuf Estes when he talked with Bill Cosby by using the words "Salam alaykum" (Peace be to you).

Watch Bill Cosby's face as he laughs at how simple and easy Islam can be explained.

Make dua for him, and for all of the people who hear about this - to see the truth about the world's fastest growing religion: ISLAM & to be GUIDED