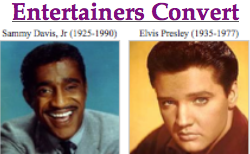 According to rabbinic law, a Jew is defined as either a person born of a Jewish mother or one who has been converted to Judaism.

"...Nancy Burdine was married to Abner Tackett (Elvis’ great great maternal grandmother). Nancy was of particular interest to Gladys for her Jewish heritage, often remembering Nancy's sons for their Jewish names Sidney and Jerome. Nancy and Abner had a daughter Martha who married White Mansell. The daughter which they named Octavia, nick-named Doll, who was Elvis' maternal grandmother."

"...Doll and Robert had nine children. Gladys Love was the fifth daughter born followed by 3 more brothers and one sister. After his mother died, Elvis personally sought to design his beloved mother’s gravesite which included a Star of David on Gladys Love Presley's tombstone. The decision was made by him in honor of his Jewish heritage. Something his mother was proud of and acknowledged to Elvis at a very early age.

Later in life, when Elvis discovered the teachings of Judaism, Zen Buddhism and the occult teachings through his hairdresser Larry Geller he became familiar with the Hebrew alphabet and its symbols. From then on part of his on-stage wardrobe throughout most of 1977 Elvis wore a "Chai" necklace. When Charlie Hodge asked Elvis why this particular piece of jewelry was so important, Elvis replied, "I don’t want to miss out on goin' to heaven on a technicality." Note that two letters form Chai, the Hebrew word for “life.” "Aron" was the spelling the Presley's chose, to resemble his twin brother's middle name "Garon". Toward the end of his life Elvis sought to change the spelling to the traditional and biblical "Aaron", in the process he learned that the official state records had listed it as "Aaron" anyway, and not "Aron" as on his original birth records. "Aaron" is the spelling his family chose for his tombstone. 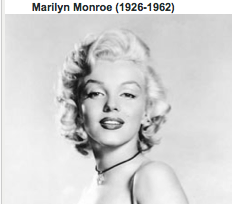 When the prolific Jewish playwright Arthur Miller first met Marilyn Monroe it was at a cocktail party in Hollywood. When they met some years some years later, after her divorce from Joe DiMaggio, love blossomed. But when a dinner discussion regarding marriage plans cropped up, Marilyn made an unusual request: "I think I'd like to have a rabbi."

Thus, Marilyn converted in June of 1956, flanked by Rabbi Robert Goldberg, Miller, and his family. She even got a musical menorah that played Hatikvah as a gift.

According to The Jewish Times of Brookline, Massachusetts:

"Is it of your own free will that you seek admittance into the Jewish fold?" the rabbi asked.
"Yes", Marilyn said.
"Do you renounce your former faith?"
She had had none so she renounced her lack of faith. "Yes".
"Do you pledge you loyalty to Judaism? Do you promise to cast in your lot with the people of Israel amid all circumstances?"
It is good, she remembered, to suffer — if you share with others … "Yes."
"Do you promise to lead a Jewish life?"
She thought of her new family, holding each other close in a bond of love. "Yes."
"Should you be blessed with children do you agree to rear your children according to the Jewish faith?"
Her children, who would forever know who they were, who would have an answer to their questions. "Oh, yes," she said.
The Rabbi smiled at her. "Repeat after me," he said, and together they spoke the ancient words of the convert.
"I do herewith declare in the presence of God and the witnesses here assembled that I … seek the fellowship of Israel.
"I believe that God is one Almighty, Allwise, Most Holy …
The Rabbi took her hand and gave her solemnly a name chosen from the Bible — a name which she keeps entirely to herself. "With this name as token you are now a member of the household of Israel and have assumed all its rights, privileges and responsibilities." His hand was on her head. 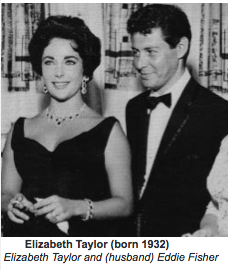 On the January 15, 2001 "Larry King Live" show, Elizabeth Taylor was asked "You are Jewish, are you not?" and she replied "I am, I am."
Her conversion to Judaism took place after the death of her husband Michael Todd, he was a famous producer and movie impresario. This was just before her marriage to singer Eddie Fisher.

Elizabeth Taylor narrated portions of the movie “Genocide,” produced by the Simon Wiesenthal Center, that went on to received the 1981 Academy Award® for best feature documentary, the first Holocaust documentary to be given this honor.

Rabbi Marvin Hier, Director of the Wisenthal Center, describes how he “ flew to Washington, D.C., to ask United States Senator John Warner if he would show the script to his then wife, Elizabeth Taylor. Warner, a good friend of the Center, had worked closely with us on a number of social action issues; he promised he would take the script home to Elizabeth, but cautioned me against overoptimism. "You know stars; you can't tell which scripts they will accept. I'll call on Monday either way," Senator Warner promised.

“On Monday, Warner called excitedly. "Rabbi, I've got both good and bad news. The good news is that Elizabeth will do it without remuneration. The bad news is you ruined my weekend-she couldn’t stop crying from Friday to Sunday night."

“A week later, Elizabeth Taylor and I had lunch at the Polo Lounge in the Beverly Hills Hotel. A Greyhound bus driver spotted her coming in and alerted his bus load of tourists, who soon found the secluded window table where we were seated. When Elizabeth noticed them and turned around to wave, I told her that they did not come to see her, but that what attracted them was the sight of an Orthodox rabbi at the Polo Lounge! At this meeting, Elizabeth made it clear that this project was very special to her, since she regarded the Jewish people as her people, and wanted to identify personally with the tragedy of the Holocaust. She asked if we could record in London while she was filming Agatha Christie's The Mirror Cracked. She also asked if I could coach her in the correct Yiddish and Hebrew pronunciations that were part of her narration. We agreed to record in London in June with two days set aside for rehearsal.

I flew to London to record Elizabeth Taylor's segments. Elizabeth Taylor pronounced "Mir velen zei iberleben " ("We shall outlive them") like a Jewess from Warsaw, and her perfectly accented "Hazak F' Ainatz" ("Be Strong and Brave") drew compliments from Israel's ambassador to the United States. She was deeply moved during the recording of one of the stories. She wept and could not continue recording Leon Kahn's description of the murder of the residents of Elsiskes at the hands of their Ukrainian tormentors.” 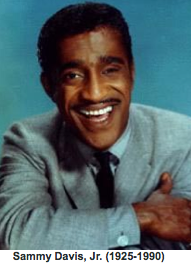 In 1954, entertainer Sammy Davis, Jr. almost died in a car accident where he lost his left eye. While in the hospital, his friend Eddie Cantor enlightened him on the similarities between the Jewish and black cultures. While he convalesced, Davis had time to reflect and to engage in long conversations with a rabbi at the hospital.

Davis later said that he found many parallels between the challenges Jews and black Americans faced, both historically and contemporarily. This deep reflection led Davis to convert to Judaism, a calling he embraced throughout his life--and characteristically worked in as fodder for his act, joking that he was entertainment's only one-eyed Jewish black man.

It was not long after his conversion, and he refused to work on Yom Kippur. The director of the movie “Porgy and Bess” got angry and called the legendary producer Samuel Goldwyn. Goldwyn immediately called Sammy and wanted to know if it was true about his refusing to work. Sammy said that, as a Jew he could not work on the Day of Atonement. There was silence for a moment, with Goldwyn no doubt noting that stopping production would cost $30,000, a large sum then. Finally, Goldwyn (who was also Jewish) said, "Bless you." Production on the film was stopped for Yom Kippur

Is this the way to promote our faith of Islam?

Should we put such a focus on these new people?

Don't they have enough problems coming into Islam and giving up their past?

WE WANT TO HEAR IT FROM YOU

What do you say?