ISLAM NEWSROOM DATELINE: "Muslims to Jesus Christ" (peace be upon him)

For centuries the discussion of who Jesus (peace be upon him) really is has perplexed Christian clergy and confused even scholars as to who the man-god-spirit or prophet really was, or if he really was at all.

Let's use our minds instead of other people thinking for us . . .

Question:
How Did Jesus Pray?

About 600 years after this debate began, there appeared a prophet of God (peace be upon him), in the desert of Arabia. He said he received revelation from Above, that confirmed what came before to others (prophets) like him and reaffirming the same message - a message of peaceful submission to the Will of God, on earth as it is in Heaven

"Worship God, Alone - without any partners!" 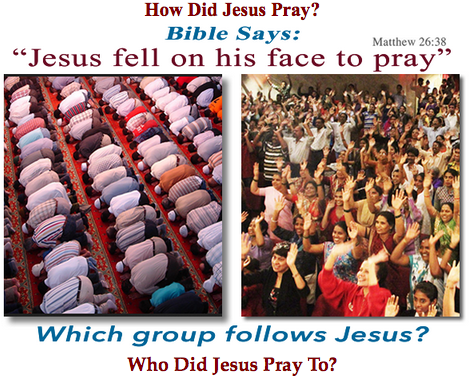 His name was Muhammad (peace be upon him) and his message was The Recitation (Al Quran), and the Quran in Arabic tells the story of many things - past, present and future - including clarification and verification of who and what - Jesus of Nazareth really was (and is today).

According to the Quran - Jesus (peace be upon him) is the son of Mary, by miracle conception, The Word of God, The Messiah, The Prophet of God, messenger of Truth, who predicted one to come after him, Ahmad. 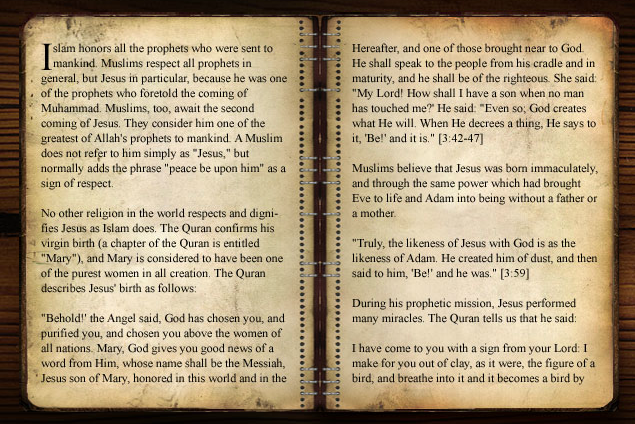 Let's look to the translation of the meanings from the Arabic of Quran. 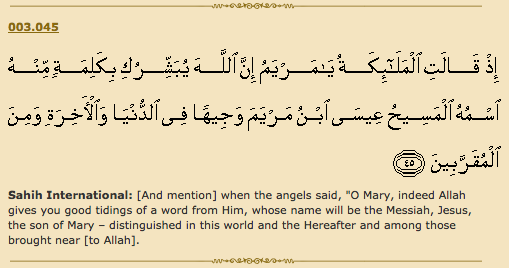 [click image to visit Allah's Quran]
The Following Verses Are From Quran, Chapter 3, verses 45 to 70:
Chapter 3, verse 45
When the angel said, "O Mary, indeed Allah gives you good tidings of a word from Him, whose name will be the Messiah, Jesus, the son of Mary – distinguished in this world and the Hereafter and among those brought near [to Allah].
Chapter 3, verse 46
He will speak to the people in the cradle and in maturity and will be of the righteous."
Chapter 3, verse 47
She said, "My Lord, how will I have a child when no man has touched me?" [The angel] said, "Such is Allah; He creates what He wills. When He decrees a matter, He only says to it, 'Be,' and it is.
Chapter 3, verse 48
And He will teach him writing and wisdom and the Torah and the Gospel.
Chapter 3, verse 49
And [make him] a messenger to the Children of Israel, [who will say], 'Indeed I have come to you with a sign from your Lord in that I design for you from clay [that which is] like the form of a bird, then I breathe into it and it becomes a bird by permission of Allah. And I cure the blind and the leper, and I give life to the dead – by permission of Allah. And I inform you of what you eat and what you store in your houses. Indeed in that is a sign for you, if you are believers.
Chapter 3, verse 50
And [I have come] confirming what was before me of the Torah and to make lawful for you some of what was forbidden to you. And I have come to you with a sign from your Lord, so fear Allah and obey me.
Chapter 3, verse 51
Indeed, Allah is my Lord and your Lord, so worship Him. That is the straight path."
Chapter 3, verse 52
But when Jesus felt [persistence in] disbelief from them, he said, "Who are my supporters for [the cause of] Allah?" The disciples said," We are supporters for Allah. We have believed in Allah and testify that we are Muslims [submitting to Him].
Chapter 3, verse 53
Our Lord, we have believed in what You revealed and have followed the messenger [Jesus], so register us among the witnesses [to truth]."
Chapter 3, verse 54
And they [i.e. the disbelievers] planned, but Allah planned. And Allah is the best of planners.
Chapter 3, verse 55
[Mention] when Allah said, "O Jesus, indeed I will take you and raise you to Myself and purify [i.e. free] you from those who disbelieve and make those who follow you [in submission to Allah alone] superior to those who disbelieve until the Day of Resurrection. Then to Me is your return, and I will judge between you concerning that in which you used to differ.
Chapter 3, verse 56
And as for those who disbelieved, I will punish them with a severe punishment in this world and the Hereafter, and they will have no helpers."
Chapter 3, verse 57
But as for those who believed and did righteous deeds, He will give them in full their rewards, and Allah does not like the wrongdoers.
003.058
This is what We recite to you, [O Muhammad], of [Our] verses and the precise [and wise] message [i.e. the Qu’ran].
Chapter 3, verse 59
Indeed, the example of Jesus to Allah is like that of Adam. He created Him from dust; then He said to him, "Be," and he was.
Chapter 3, verse 60
The truth is from your Lord, so do not be among the doubters.
Chapter 3, verse 61
Then whoever argues with you about it after [this] knowledge has come to you – say, "Come, let us call our sons and your sons, our women and your women, ourselves and yourselves, then supplicate earnestly [together] and invoke the curse of Allah upon the liars [among us].
Chapter 3, verse 62
Indeed, this is the true narration. And there is no deity except Allah. And indeed, Allah is the Exalted in Might, the Wise.
Chapter 3, verse 63
But if they turn away, then indeed – Allah is Knowing of the corrupters.
Chapter 3, verse 64
Say, “O People of the Scripture, come to a word that is equitable between us and you – that we will not worship except Allah and not associate anything with Him and not take one another as lords instead of Allah." But if they turn away, then say, "Bear witness that we are Muslims [submitting to Him]."
Chapter 3, verse 65
O People of the Scripture, why do you argue about Abraham while the Torah and the Gospel were not revealed until after him? Then will you not reason?
Chapter 3, verse 66
Here you are – those who have argued about that of which you have [some] knowledge, but why do you argue about that of which you have no knowledge? And Allah knows, while you know not.
Chapter 3, verse 67
Abraham was neither a Jew nor a Christian, but he was one inclining toward truth, a Muslim [submitting to Allah]. And he was not of the polytheists.
Chapter 3, verse 68
Indeed, the most worthy of Abraham among the people are those who followed him [in submission to Allah] and this prophet, and those who believe [in his message]. And Allah is the ally of the believers.
Chapter 3, verse 69
A faction of the people of the Scripture wish they could mislead you. But they do not mislead except themselves, and they perceive [it] not.
Chapter 3, verse 70
O People of the Scripture, why do you disbelieve in the verses of Allah while you witness [to their truth]?
Learn More About - "The Muslim Jesus"
www.911Bible.com/who_was_jesus.php