Over 3,000,000 pilgrims "in White" began to throw the stones at the jamerat - in complete safety due to some thoughtful planning on the part of the Saudi government. As always, they put the "guests of Allah" first in all of their efforts and make sure the pilgrims have the most secure, safe and fulfilling hajj (pilgrimage) to Makkah.

In Mina - it's time to throw the seven stones symbolically (at the devil), but this year something is different, very different.

Today it is even easier, safer and more secure than before. Each year has seen improvemnts to this ritual, that at one time used to take the lives of quite a few pilgrims every year.

Huge numbers, combined with a lack of understanding on the part of the pilgrims as to how they were supposed to conduct themselves and follow directions, made this a deep concern for the Saudi government and the many volunteers trying to help make the hajj safe and proper for the pilgrims.

Comments of pilgrims at Mina near the stoning area:
“We are thankful to Almighty Allah that the first day passed off smoothly,” National Guard official Khalid Al-Zahrani told news reporters -
“Our security forces ensured that there is no crowding at any point at Jamrat Bridge.”

The stoning ritual begins following the day of Arafat (9th of Dhul Hijjah) and a night in Muzdelifa, after the pilgrims slaughtered sacrificial animals after performed Tawaf Al-Ifadah.  The first day of the three-day stoning ritual was orderly.

"I was a afraid of problems at the Jamarat bridge, but it was very easy," Faeq Jarada, a 60-year-old pilgrim from Gaza said.

Pilgrims hurl seven pebbles from behind a fence or from an overhead bridge every day for three days at each of the three 18-meter (58-foot) high concrete pillars symbolizing the devil.

Satan appeared on the same site to Prophet Abraham, son Isma`il and wife Hagar, who each threw seven stones at the devil.

After the stoning ceremony, the pilgrims go to Makkah for Tawaf Al-Wadaa.

Hajj is one of the five pillars of Islam and is an obligation for all able-bodied, financially capable Muslims at least once in a lifetime.

Muslims who perform hajj properly return to their homes having all their sins washed way as promised by Prophet Muhammad.

Many pilgrims praised the smoothing stoning rituals this year.

“The arrangements were excellent and great care was taken to avoid the massing of pilgrims on the Jamrat Bridge, which has been a scene of tragedy on numerous occasions in the past,” said Kashmiri pilgrim Mehbooba Mufti.

Stampedes of pilgrims were frequent at the Jamarat area in past years.

In a bid to avoid stampedes during the ritual, Saudi authorities build a high-tech five-storey bridge to end crowding. 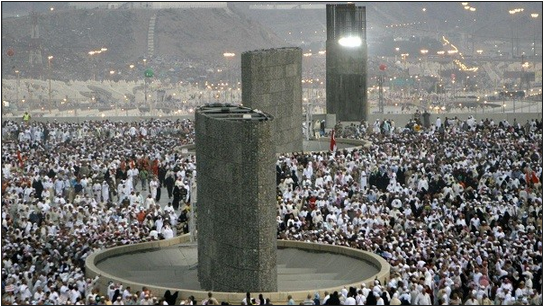 Pilgrims were prevented from bringing any large bags into the jamarat area, to prevent people lugging suitcases from jamming up the crowds.

After throwing the pebbles, many pilgrims shaved their heads as part of their purification.

"We have finished the most important steps in hajj,” Nadil Novany, a 42-year-old Jordanian pilgrim, said.

“Early in the morning we went to the Grand Mosque in Makkah and walked around the Kaaba seven times.

"Then we came back to Mina, threw stones at the jamara and then prayed at the dawn prayer. Then we shaved our heads, and sacrificed sheep in thanks."